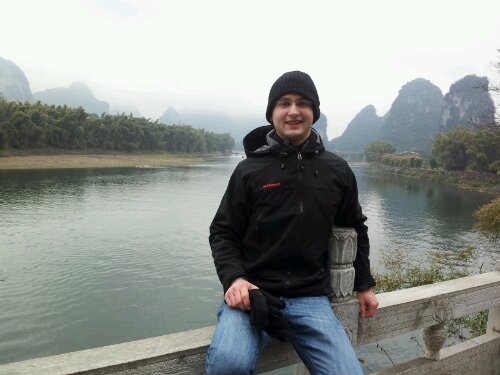 The day before yesterday, our last full day in Yangshou, was a lot of fun. We visited the Great Water Cave nearby, a magnificent treasure of underground karst hydrogeology. Its first few rooms are full of beautiful stalactites and (this time, real) stalagmites. If this cave was in Europe it would be thoroughly protected by dozens of environmental laws in order to prevent irreplaceable damage, but the Chinese prioritize the visitor’s entertainment over enduring conservation. Thus, we could touch the funnily shaped and colorfully illuminated stones, crawled through tiny holes, and took an underground mud bath, which was, despite its coldness, really fun. In the last chamber, we regained normal body temperature in a relaxing hot spring bath, only faintly disturbed by the tour photographer playing Counterstrike on his desktop computer – directly in the cave.

After a small meal I made myself for dinner (the Chinese pendant to our Chefkoch dishes – just pour hot water into the disposable bowl prefilled with meat and noodles), we only discovered on the last day there’s a really nice bar at our hotel’s roof top. I played table soccer against Franz and, naturally, lost twice.

The alarm clock went off early yesterday, in fact much earlier than we were used to. We had to get ready for the boat trip back to Guilin, and the packing of luggage was far more difficult since all of us used the opportunity for cheap shopping, Susi and Franz more than I did.

The boat we eventually embarked was supposed to be sheltered, but as it slowly made its way up the Li river towards Guilin it became draughty and quite chilly. However, we were once again rewarded by a beautiful landscape: fantastic mountains and hills reaching to the sky on both sides of the narrow valley. Especially the locals’ creativity to name some of the formations was amusing, e.g. “tortoise climbing mountain”.

Only a few minutes before reaching the final stop, we were surprised by a heavy thunderstorm. Our clothes soaking wet, we arrived at the railway station in Guilin by bus.

Altogether, I enjoyed the trip to Guilin and Yangshou very much. It seems, after some cultural acclimatization, we have finally “arrived” in China. The people are mostly friendly, helpful and seem to forgive us our incapability of speaking Chinese. Domestic tourists are curious where we’re from and want to take photos of us, especially of blond Susi. After some days we even managed to understand a few simple characters.

Right now as I write this blog entry, I’m sitting – actually it’s more lying than sitting – in the sleeping coach of the overnight train to Shanghai. We have booked second class tickets, the so-called “hard sleeper” category. The compartments, each comes with six beds, actually resemble booths because all of them are open to the wagon’s aisle and there are no doors.

It’s half past seven in the morning. We’ve just been woken up by calming piano and flute music through the speakers. Since the lights were turned off at 10 p.m. sharp, an unmistakable signal for all passengers, I was able to enjoy a good amount of sleep. Of course, I slept with all my important belongings (money, passport, cell phone) right next to me, but security concerns don’t seem to be an issue here. Other passengers are putting out iPads from their bags stored freely accessible over the aisle right now to read the newspaper. And yesterday I observed a man using sellotape to fix his two bags together as if cruel thieves were probably too scared to rip them apart again.

We boarded the train at 7 p.m. yesterday and will arrive in Shanghai around 3 p.m. today – with 20 hours my longest train ride so far. Including the boat trip and the waiting time until the train’s departure, we’ll have travelled for nearly 30 hours. Enough time to read more than one book.. 😉