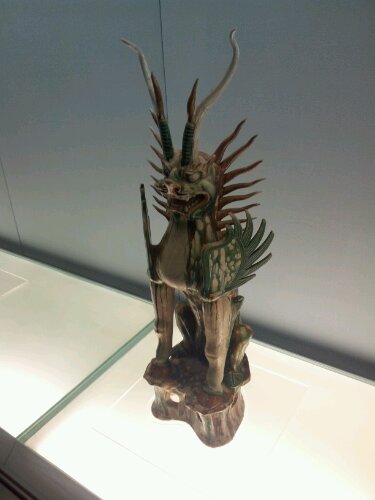 The train, it seems, offers the best opportunity to write. Sitting in the high-speed train to Beijing (currently 305 km/h), I summarize my impressions of Shanghai.

Alex, one of Aaron’s former schoolmates, was already waiting at the railway station, holding a handwritten A4 sheet with my name on it. Together we took a taxi to the hotel we would be staying at for the following five nights. Located only a few metro stops from the city center and rated with four stars, it only became affordable because Alex knows the manager well. For the first time here in China, breakfast was included, so we started the following days with eggs (sunny side up), coffee and much more.

In the evening, Alex led us to the jaw-dropping artistic circus show “ERA – Intersection of Time”. Most parts, especially the high wire acrobats and the seven (!) motorbikes in a steel ball, were so thrilling that I completely lost track of time. And some other parts inspired with beauty in its purest sense, combining romance with ever-so-light dancing in mid-air.

On Tuesday and Wednesday we had a lot of time for sightseeing. Since we wanted to follow recommendations of local people, Alex created a list of a few must-see places and accompanied us to the Shanghai Museum in the morning. His explanations soon rendered very useful in helping us to understand the various exhibitions about Chinese culture and art. Through a nice pedestrian shopping street – I resisted the temptation – we approached the Bund, the famous left boardwalk of the Huangpu river that allows a nice view of the city’s skyline on the other side.

Before we left Germany we had agreed to pack only clothes for half the trip, assuming there must be self-service washing salons in all major cities. A mistake, as it turned out: After more than an hour trying to find one of the potential salons we had previously looked up on the internet, we gave up and decided to entrust our clothes to a normal dry cleaner.

The Yuyuan Park’s famous old buildings shaped like pagodas are a marvelous example of traditional Chinese architecture, but unfortunately, the vast majority of tourist shops deprive the place of its unique atmosphere. Later on, we visited Pudong, the town’s financial quarter with lots of skyscrapers. Jin Mao Tower is not the tallest, but there is a nice bar called “Cloud 9” on the 87th floor. Despite the smog, the misty weather in general and the dimmed windows, the view over the city and the well illuminated skyline was definitely worth taking pictures.

The time in Shanghai was interrupted by a daytrip to Hangzhou on Friday, which I dedicate a blog post on its own.

We started our last day – the weather was mild and sunny – with a walk through People’s Park. Childish as I am, I suggested a ride with a small rollercoaster for children, earning fancy looks from the locals sitting nearby, probably also due to the exaggerated screaming 😉

After lunch in an exquisite Taiwanese restaurant, a ride with the Maglev train (based on German Transrapid technology) was obligatory. Cruising with outstanding 430 km/h, the landscape outside was rushing by like we were flying close to the ground. Going back by metro took us roughly six times as long.

In the meantime, Alex was busy at university, writing exams and attending seminars. We were glad to be able to say goodbye face-to-face – thank you so much! We spent our last hours in the city in a bar street with newly renovated, traditional small cute houses. Somewhere between my first and my second cocktail I promised myself to come back to Shanghai once again.