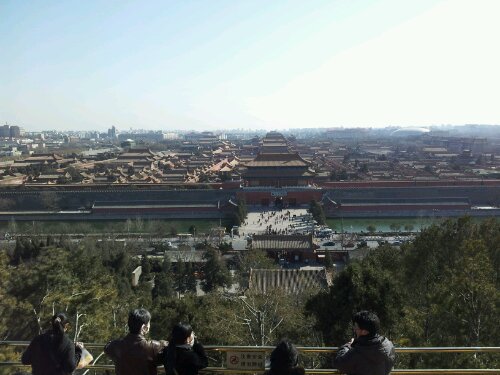 Very similar to our arrival in Shanghai, we were picked up at the railway station. Su Shi, a friend of Xuanli, brought us to the hotel that was strongly recommended by the American opera singer we had met on the ferry from Hong Kong to Macau. It was decent, cheap enough for a week’s stay and offered – for the first time during our trip – an actual triple room, which was equipped with heating and an incredibly water-saving shower. The taxi driver dropped us off a few hundred meters away because it’s located in a narrow Hutong, nearly inaccessible by car due to lots of one-ways. During the walk to the hotel I did not only realize the temperature had certainly fallen below 0° C, but also that I was able to see stars in the sky – unbelievable in a city with heavy air pollution and omnipresent illumination. We were told the weather had been very windy recently, blowing the smog away and enabling unusually far sight.

Mentioned first in every travel guide, the Forbidden City probably remains Beijing’s most well-known historic site. We met with Su Shi in the early morning (meaning 09:30) and took the metro to Tian’anmen square, the place of the events in 1989 at the very heart of Beijing nowadays constantly kept under surveillance. The actual palace grounds are entered through a series of impressive gates and a broad bridge over the wide moat around the complex. The ceremonial buildings including the Three Great Halls (Halls of Supreme, Middle and Preserving Harmony) lie on the north-south axis and provided in a partly repainted form an original experience of the imperial style of architecture as well as plausible imagination of how the City would have looked like in former centuries. While the official front parts of the palace with an obvious absence of green plants create a stony atmosphere of seriousness, the emperor’s garden and the countless minor buildings often surrounded by calming trees seemed much more friendly and illustrated the luxurious life at the imperial court. After a long stay inside the fascinating complex we climbed up the hill of the directly adjacent Jingshan Park, where we could enjoy an amazing view over the Forbidden City in the south and the endless building area of Beijing stretching towards the horizon in all directions. I already mentioned the cloudless sky and the clear dry air, allowing nearly as perfect sight as from Alpine mountain tops in mid-autumn.

In the evening, we met Cindy, another friend of Aaron. She and Su Shi led us to a popular restaurant offering Beijing duck, one of the most delicious meals so far. Subsequently we moved to a nice bar with live music and spent a wonderful time with our two new friends who definitely confirmed our impression of outstanding hospitality once more.

Requiring a break from the exhausting day before, we decided to skip breakfast yesterday and gain a few additional hours of sleep instead. Starting with the Dongyue temple, a big Taoist facility, we discovered the diplomatic area of Chaoyang district with many tall office towers and arbitrarily shaped western glass buildings. Since we had to transfer no less than three times, it then took some time to reach the Olympic Sports Center in the north. The stadium nicknamed “bird’s nest” was certainly worth a short visit but the entire area looked quite empty apart from several groups of bus tourists.

Today’s sightseeing target was the imperial Summer Palace at the western border of Beijing. Upon entering the enormous site we found ourselves at the shore of a beautiful lake strongly reflecting the sunlight due to its half-frozen surface. On our right there was a tall hill holding the Tower of Buddhist Incense we would later climb up to, looking down to a cute island connected to the garden’s entrance by a 17 arch stone bridge. The entire complex is beautifully designed like traditional Chinese gardens and comprises lots of pavilions, rocks and guided trees. Not only the view from the top but also the experience of walking through the relatively quiet park was magnificent and served as ideal revitalization.

In the late afternoon we spent some money at the Yashow clothing market on fake shirts and sweaters before returning to the hotel.

I’m really looking forward to our daytrip to the Great Wall tomorrow and better finish writing now – Susi and Franz are already asleep..