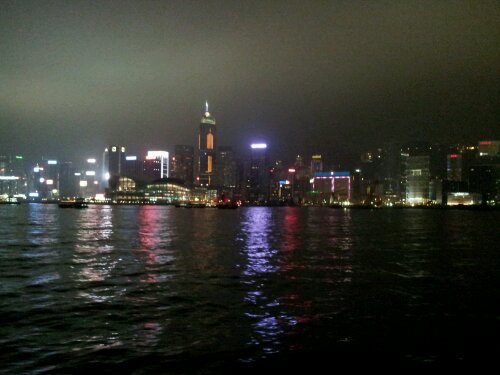 The days in the special administrative regions Hong Kong and Macao were amazing. I’m currently onboard the ferry from Macao to Shenzhen airport, here’s a short summary of the last few days:

Due to the delay (3.5 h) of our flight from Beijing to Hong Kong and Jacqueline’s serious spine injury, which had to be treated in a hospital directly after arrival, it was impossible to meet at the airport. However, we were told to take the train and bus to one of her friends called Yan, were picked up by her father and were surprised of their great hospitality. Subsequently having spent a wonderful evening with Yan and her friends in Kowloon (including the Avenue of Stars and an awesome bar on 20th floor), we learned how to eat with chopsticks correctly and caught a glimpse of a city that never sleeps.

All three of us spent the night at Yan’s place in the living room, merely bigger than the hallway of my flat in Munich, but even though we enjoyed long and comfortable eight hours of sleep. On the second day, Yan was so kind to show us around in the Central neighborhood and lead us to the Peak, the highest point in town. Despite the fact it was really foggy, the view over the entire town was magnificent. The day ended once again in a superb traditional restaurant, where we finally met Jacqueline and found out that the Chinese form of soup fondue is not only much fun to eat but also tastes astonishingly good.

We used our last day in the city mainly for two things: First, it was necessary to plan, book and prepare parts of our remaining trip, including the purchase of Chinese SIM cards for our cell phones. And second, we went shopping in the Mong Kok area. Traditional markets, boutiques in pedestrian shopping streets and a really huge mall with more than 15 floors provided all kinds of shopping experience. Unlike Susi and Franz, I couldn’t find anything nice for me – a pity.

While Hong Kong seemed a lot like other western cities, Macao is unique in many different ways. The old town invites to a journey back into the last century: Classical western architecture is randomly combined with Chinese elements, there are many Catholic buildings, some of them only as ruins such as St. Pauls cathedral (only the half Chinese, half baroque front facade is left), and all the street signs are in Portuguese only.

However, the enormous contrast between the original buildings with only a few floors and the huge casino skyscrapers were definitely the most impressive part. We walked through the Venetian hotel, a place ruthlessly combining sterile copies of Venetian houses, canals and gondolas with shops and poker tables. Not even the gondoliers’ “buona sera” greetings can prevent that the place remains a disappointment to visitors who had been to the real Venice before.

We enjoyed a few drinks in the Lisboa casino, the biggest and oldest one, and before the departure to the ferry we extensively convinced ourselves of the Westin hotel’s spa 😉

Especially Hong Kong was great, but also Macao was worth a day’s visit. Thanks again folks – Jacqueline, Yan & Co – for accommodation, showing us around and your patience! 🙂