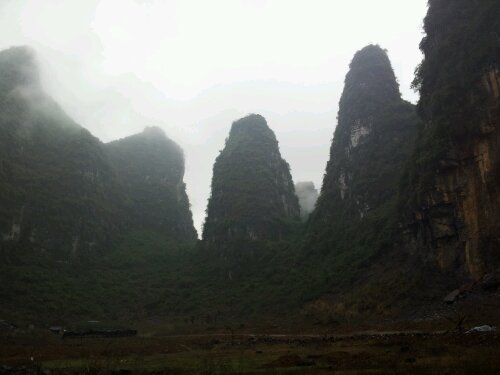 The journey to Yangshou was adventurous: First, we took the ferry from Macao directly to the airport of Shenzhen and boarded the Airbus to Guilin, where we stayed overnight in a decent hotel. In the morning, we were happy to find the public bus to Yangshou.

Already upon entering the People’s Republic of China, we realized that we’ve arrived in a completely different country. English is not of much help, neither in its spoken nor its written form, and the fact that we can’t read Chinese characters like we could read words in other languages written with the Latin alphabet complicates a lot. Used to western traffic regulations, we were surprised to find that obeying signal lights, “give way” signs or even the well-established convention to drive on the right side seems more like a suggestion. Also, we immediately missed the British willingness to form queues, which was a matter of course in Hong Kong.

Finally (and probably worst), there are many sometimes really annoying hawkers in public areas, trying to sell stuff or advertising their taxi company or travel agency. In Guilin, it was hard to find the bus station and the correct bus to Yangshou; in the end we required the help of one of those guys and paid a little bit more for the ticket than all the locals did. By the way, the term “express bus” doesn’t necessarily mean the bus won’t stop at literally each corner picking up passengers, thus taking about half an hour for a few kilometers.

Personally, I felt relieved when we left Guilin, but the breathtaking scenery around Yangshou was completely worth the detour. The landscape, which is also featured on the 20 Yuan note, looks like giant, rounded and beautifully bewildered stalagmites randomly dropped onto the plane, forming deep valleys and steep hills while still allowing shippable streams such as the Li Jiang, minor rivers and small lakes to emerge. Due to the great humidity, fog constantly veils the hills farther away than a few kilometers into misty shadow, suggesting the hilly landscape continues to infinity. Only far visible cell phone towers at neuralgic places once in a while irritate the impression of untouched nature.

Our hotel was on West street, directly in the middle of the small and very touristic city. After arrival, we decided to walk through the narrow streets full of shops down to the Li Jiang, which passes through both Guilin and Yangshou. In the evening, a splendid dinner and a drink in a nice bar completed the first day.

An extensive, five hour bicycle tour on the following day confirmed my impression of the marvelous scenery. Our hardly any English speaking guide showed us breathtaking places otherwise only known from postcard motifs: the omnipresent hills, rice and vegetable fields, rivers, an ancient tree (1000 years), small villages and isolated farms. Furthermore, although it’s only March, we bought self-picked strawberries and oranges. As dusk drew closer, we had a snack in a Chinese fast-food restaurant and played a few rounds of billiard.