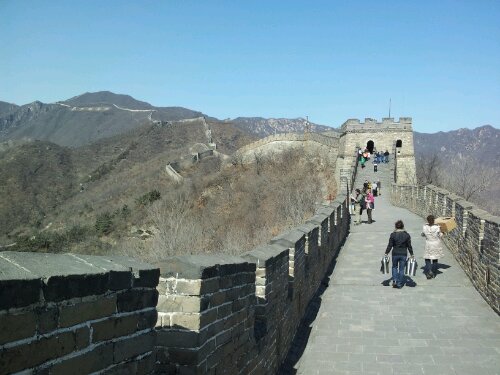 Mr. Liang punctually knocked on our hotel room’s door. He was our driver to the Great Wall, couldn’t speak English, but at least seemed to be a funny guy. Due to his audacious driving style that somehow resembled a Hollywood car chase it took him only an hour to steer his vehicle through the congested roads of Beijing to Mutianyu.

Naturally, the Wall followed the terrain on mountain ridges so that the enemy could be seen as far ahead as possible. Thus, we needed to ascent to one of the many watchtowers by chair lift. The weather couldn’t have been better, and already on the way up I was astonished by the easiness the surprisingly broad barrier was meandering across complex terrain. We decided to walk along the Wall in the direction where we expected fewer tourists, often climbing steep steps and only sometimes passing plane sections. Cheekily ignoring two “no admittance” signs, we left the well restored parts of the Wall behind and entered a strongly decayed, nearly impassable segment, which was vegetated by many bushes and trees.

Having collected not only many photos of the impressive Wall embedded in a magnificent landscape, but also a small graze (and lacerated underpants), I returned to our starting point. There we lay down in the mild sun on another watchtower’s roof – without wearing sweaters or even jackets – before we adventurously took the summer toboggan run (Sommerrodelbahn) back down again to the parking lot. Remembering the Great Wall as one of our trip’s highlights is definitely justified.

On Thursday we met Andy, who took Chinese hospitality to the next level: Only being a friend of a friend (Clover) of a friend (Bob) of one of my fellow students (Aaron), he treated us to a full lunch menu including Beijing duck as a matter of course and declined even the tiniest financial contribution of us. He is enrolled as Master student at Tsinghua University, one of the most renowned universities in China, and showed us around the spacious campus. Founded 101 years ago as prep school for students going to the US, the institution comprises several buildings from the early 1910s. Ironically, most of these old ones resemble buildings at North-American universities striving for Ancient values and virtues, and therefore also make use of e.g. Ionic columns or pseudo-Latin inscriptions such as “SCIENCE BVILDING”. Andy, thank you so much for this half day!

In the late afternoon, we finally agreed – the idea had already come up during the first week – to have an extensive full-body massage. Since we were lying on massage beds in the same room, easy chatting was possible while we were treated by trained masseurs. The day couldn’t have ended more relaxing.