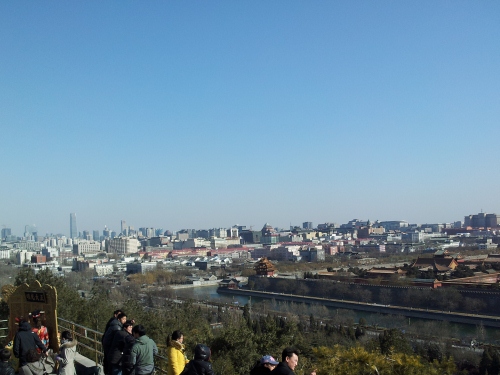 The last two days in Beijing were overcast and much colder than the days before. At least, the weather appeared stable enough to do a bicycle tour to all the important sights in the center we had not been so far. Since our hotel only offered city bikes without gearshift and hardly adjustable saddle, we chose a decent route and started with the Yonghegong Lama Temple nearby, one of the largest and most important Tibetan Buddhist monasteries in the world. As a short lunch break, we rested in a small café offering surprisingly good cappuccini and sandwiches next to the Bell and Drum Towers, which were both used to announce the time. In the Beihai Park – we only got there because of the White Pagoda – Franz and I insisted on renting a pedal boat. In the afternoon, we rode all the way south to Tian’anmen square, the impressive National Grand Theater and even further to the Temple of Heaven, which is surrounded by an extensive beautiful garden we only caught a glimpse of during a 25 minutes’ walk around the temple.

Later on, we met Su Shi and once again headed for the Houhai lake area with hundreds of bars of all imaginable kinds. We ended up in a tiny cocktail bar, made friends with guys from Seattle and Exeter and tried a few interesting flavors of beer.

As Su Shi had suggested the evening before, we temporarily stored our luggage in his student dorm room while he showed us around his campus. First of all, we were stunned by the privacy-lacking proximity the students cope with. In the bedrooms of approximately 5 by 3.5 meters, rows of two elevated beds on both sides with desks underneath form a narrow aisle from the door to the window, accommodating four students in total. The residents of two of these rooms each share a pair of washing basins directly in the vestibule as well as two small bathrooms. This way, barely 100 people are quartered on a single floor. I extrapolated there must be around 15,000 students (!) living in the ten dorm towers just fitting in a standard city block. The university itself (Beijing University of Aeronautics and Astronautics) appeared – apart from the really old buildings – similar to the other one we had already visited. Especially the new main building appealed because of its imposing architecture. For our last dinner, Su Shi invited us to a nice Hot Pot restaurant, before we took a taxi to the airport.

Due to the massive delay of six hours, we’ve had enough time on the plane to look back at the past three weeks. In retrospect, our time in China was wonderful, and I wouldn’t want to miss a single day of it. Having experienced exactly the right balance between city sightseeing and countryside “adventure” holidays, I was able to gain a much more diverse impression of a country that still remains mysterious to some extent. Many thanks to our fellow students Jacqueline (plus family), Aaron and Xuanli as well as their friends Yan (plus family), Brian, Elaine, Alex, Bob, Clover, Su Shi, Cindy and Andy – without you the trip wouldn’t have been half as awesome! 🙂